Unlock and root your Nexus Device

Two weeks ago, our 2012 Nexus 7 tablet became completely unusable : most of apps were no more working, also the configuration menu was not functional. Nothing more to do with it.

A complete erase of the tablet and reinstallation of Android have permitted to renew completely the tablet which is now fully working. I wanted also to flash with latest version of android, so I had to unlock the bootloader. This is normally done by installing Android SDK on computer and use specific scripts. 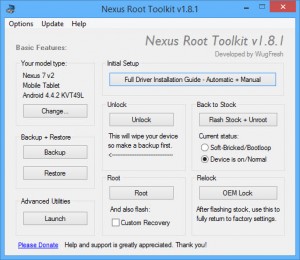 But this time I discovered a magical software that is doing everything for your nexus devices : Nexus Root Toolkit. It integrates all the software tools and explain step by step actions to be done. I advise you to use this one if you need to unlock or root your nexus