My network and home automation installation have become essential to life in our home. Without smarthome controller, the automatisms disappear. Without a server, no more mail, music, TV, internet access :-(.  A power breakdown  is therefore an increasingly feared event, but more than that the deterioration of some device due to power hazardswould be disastrous.

After an unexpected shutdown of the server probably due to an overloading on mains, I decided to set up my long autonomy uninterruptible power supply whose elements were waiting patiently.

An used APC 500 UPS.
We can find some regularly sold when internal battery is dead.
I’ve bought personnaly 2 of those for 20€.

A car battery
I’ve selected a 60Ah battery myself.
Around 80€ in a supermarket 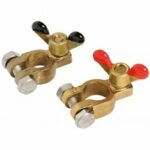 Battery terminals
Around 6€ in a supermarket

Multi-strand cable 1,5mm2 black and red.
2 meters of each color
Around 3€ in DIY store 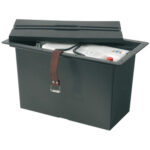 A battery tray for camping cars
The tray is dedicated to the storage of batteries, and resistant to possible leakage of liquid
Around 25 € in specialized camping  shops

Conventional computer UPS use lead-acid batteries. In small models, those are 13.8V batteries, so the same voltage as a car battery.
The APC 500 is one of those old models. It should also be noted that this is an offline inverter, thus providing an average level of protection: the load is directly connected to the mains in normal conditions, and the power supply is switched to the generator from the battery only in specific case (Power failure, overvoltage). This switching takes a few milliseconds which makes the difference with professional UPS. However, an offline inverter provides a sufficient level of protection for a domestic installation.

It is therefore possible to install an external car battery outside of this UPS housing. There are however essential elements to be taken into account: 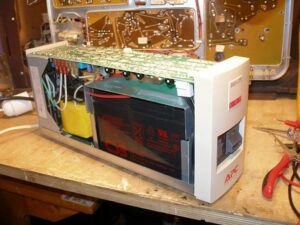 The changes to be made are as follows:

For a price of about 130 € I now have an UPS allowing me to provide 75 watts during 3 hours, tested and approved.
My network and server bay (including server, eedomus home box, ethernet switch, adsl router, wifi access point) and radio alarm clocks in the bedroom are now protected from over-voltage and breakdowns.

There remains a problem of location. This set is bulky and heavy (~ 20kg), it must be placed on the ground.
In my case his location was planned in a clearance under the stairs, not far from the electrical panel and the server bay. A specific circuit for the clock radio was also reserved.

One day of plaster and electricity and the whole installation was functional. 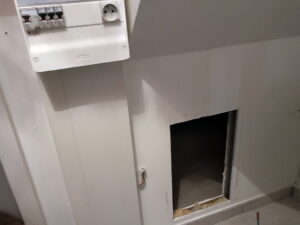 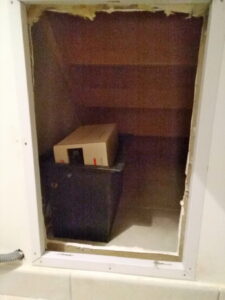