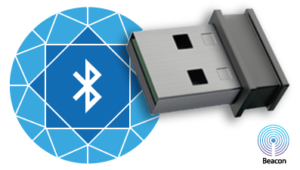 Wishing to optimize the rules governing my home according to the occupants present, I wanted to be able to detect individual presence of each member of the family.
A method often used in this case is the detection of the presence of Bluetooth Low Energy (BLE) objects such as activity trackers, BLE buttons, beacons, etc. These latter in particular exist in different forms (keyring, sticking buttons) they are small and easily carried.

Unfortunately eedomus controller is not (yet?) compatible with BLE. The detection will therefore be carried out by an external device (server, raspberry pi) and the information provided to eedomus.

I used the plugin “Presence detection“, initially intended for domoticz in order to realize the bluetooth detection function.
This plugin is independent from domoticz and doesn’t require the installation of the latter. It installs on any system running Linux : linux server, synology, raspberry pi, etc … In my case I installed it in a virtual Ubuntu 16 dedicated to home automation.

It’s of course necessary to have a bluetooth interface on this linux system. A bluetooth BLE dongle  with chipset CSR is the recommended solution because it’s widely compatible and very inexpensive. I bought myself this model for 5,83 €.

The dongle installation must be carried out correctly in order to optimize the detection range:

I personally used a USB cable initially supplied with a USB WiFi dongle, on which I added a ferrite. Three turns of cable in the ferrite helps improving filtering efficiency.

I won’t describe installation of the Presence Detection plugin because the dedicated page has a detailed description of the whole procedure. This description is well done, it includes specifics for different platform on which you can install it. Another time, Domoticz doesn’t need to be installed, so the information specific to domoticz isn’t to be taken into account. The Autorun part is also to be put activated. For ubuntu 16 it is Autorun method 2 that must be applied.
The installation would have taken place without any problem in my sinde if I had methodically followed up the instructions, they are indeed complete and clear. In fact, I skipped a few lines … and then I had to go back.

We will return later to the specific configuration to be applied for eedomus. For the moment it is necessary to configure eedomus controller to receive the information.

For each BLE device to be detected, it is necessary to create a virtual device of type http Actuator.

This actuator must be able to take two values: “HOME” and “AWAY”. 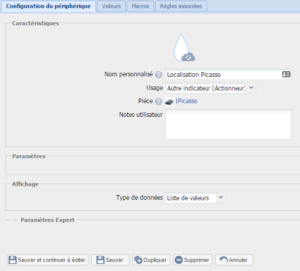 Configuring the script for eedomus

Domoticz API isn’t so different than eedomus one, and script can be configured to adapt easily to eedomus controller.

Everything is contained into variable  “URL_DOMOTICZ” which has to be changed at line 37 with following content :

LOCAL_IP_OF_EEDOMUS, YOUR_USER et YOUR_SECRET have to be filled with your personal information. Presence state update is directly sent to eedomuxs on local lan.

All Bluetooth devices have a MAC address. Sometimes it changes in time but the majority of bluetooth objects have a fixed address. Moreover, many BLE objects regularly send frames indicating their presence. It is therefore a question of detecting these frames to detect the presence of the object.

The configuration of the objects to be detected is done from line 53 of the script :

Each object is described on a single line with those parameters :

You can use also different smartphone apps more or less fonctional like this one : Android Bluetooth LE Scanner

For the time being I’ve tested this setup with the following objects :

Ticatag Tibe connect (beacon BLE)
Range is around 10 meters indoor at same floor. BLE signal have difficulties to go through concrete floor, then detection is not possible of Tibe if at second floor in my home.

Misfit flash (activity tracker)
The range is very poor, less than 2 meters, then this tracker can’t be used to detect presence in the area of a house but on a very reduced zone.

This script, initially dedicated to Domoticz, can be used easily with eedomus. The detection of multiple BLE objects is possible as long as it has a fixed MAC address and it regularly transmits signals.

Once this detection system has been set up, you will be able to set up different rules allowing to automatically switch your house to “Absence” mode for instance.