After an awaiting of 8 months (!!!) we now own a Seat Mii Electric. I have then done some charging tests with an Openevse wallbox. This wallbox’s connected to smarthome server then I can analyse charging datas of the car.

Note that apart from smartphone app which should be different from one brand to the other, it’s fairly probable that those information are although true for Skoda Citygo-e IV and Volkwagen e-up, if they are of latest generation (32kWh battery).

The vehicle is equipped with a button for management of charging which is located at the bottom of the dashboard.
This button’s showing charging status and you can also change the mode.

Lighting of the button can have three states :

Pressing this button have the following actions :

It can be done using three methods :

This subject seems simple, but it’s not. The following information are from tests I’ve done at home (electric network is recent and single-phase, wallbox openevse, 45A electric subscription)

First of all, we have to remind that technical specification of the car are true : Seat Mii Electric can charge at 32A although on single-phase installation, meaning a  full charge for 5 hours. It’s important in my case because I want to charge during night and off-peak hours which is a timeframe of 5 hours here. 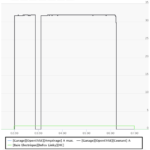 The charge time I can measure is 4h35  from 10% to 100%, then 5 hours for full charge is true. I’ve also checked that charging current, which is in fact regulated by the car itself, is constant and without peak. My circuit breaker being a 32A it would have tripped quickly if it was not the case.

Don’t hesitate to confirm or correct those information by writing a comment at the end of this post.

I’ve not tested multi-periods charging configuration. But I’ve tested with a single period, for instance using Seat connect App, here is a presentation :

Charging curve with a home wallbox

Here are two measures with end of charge set to 6h50 (“departure time”) :

We can discover several things on thos :