A fairly comprehensive study was commissioned by ADEME to compare electric and internal combustion vehicles with respect to energy and environmental aspects. It sets the date of analysis to 2012 and seeks to extrapolate these results to 2020.

The study contains data for the case of France and Germany. The situation in these countries is different due to French specificities : our electricity is mainly nuclear one, other part is about massive ratio of diesel vehicles.

One of the parameters set at the beginning of this study relates to the vehicle : it performs an average distance of 80 kms per day. His lifetime is set to an arbitrary 150,000 kms (see below) and 10 years. The vehicle is an urban car or a light commercial vehicle.

Comparison for France in 2012

The study provides a summary chart comparing vehicles for France in 2012. 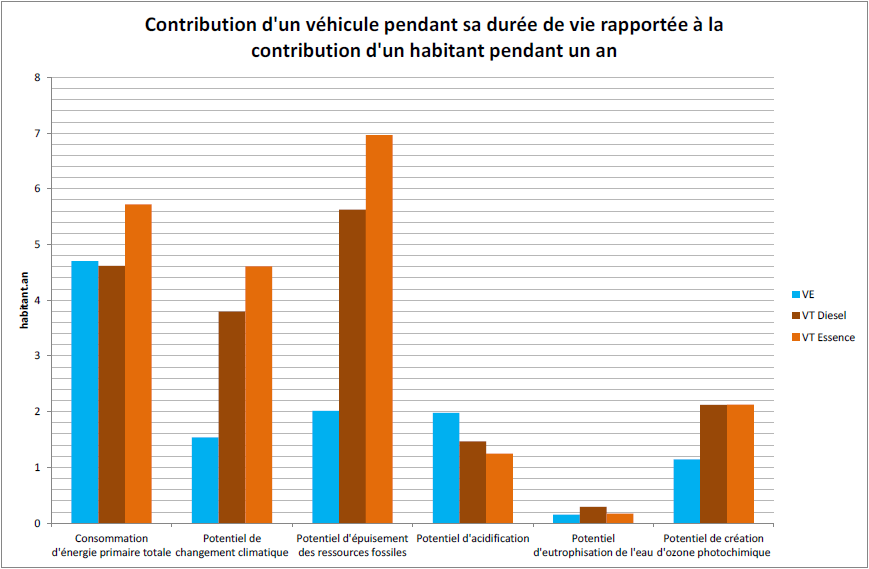 First interesting point : the primary energy consumption of a diesel vehicle is fairly better compared to an electric vehicle .

From an environmental point of view , the electric vehicle makes a clear advantage over conventional vehicles . Only the acidification potential is greater for electric vehicles , this being related to battery manufacturing. The overall result is , once again , strongly linked to the French situation favoring nuclear power.
Is this one of the reasons prompting the French car manufacturers to propose electric cars ? 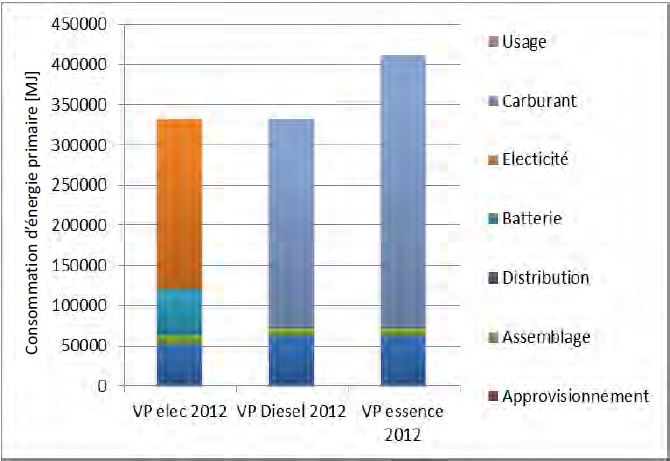 If we have a look at primary energy usage for the different types of vehicles , we can see that :

Comparison for Deutschland in 2012

The German electricity mix is more representative of the global situation. The study does not provide synthetic chart for Germany (?), We have to search information a little more. We can’t recreate charts, but an overview is possible:

In the case of Germany, the advantages of electric vehicles are balanced compared to disadvantages.

Next year projections up to 2020

The study attempts to extrapolate the results for 2020. There are different kind of changes expected during the coming years :

Improvements expected between 2012 and 2020 are summarized in the table below :

However, the results should be taken with a grain of salt, the variability of the projection is very important. We can refer for example to the curve related to potential variability of climate change: Electrical Vehicule related area overlap extensively the one for gasoline cars

Three areas are addressed in the study :

Personal reading of the study

The study was conducted for a vehicle mileage of 150,000 kms corresponding to 10 years.

This lifetime seems to me very limited, in regards to available technology that permits to produce long term reliable vehicles. I personaly expect of a car that it reachs at least 250,000 kms without major problems, in my case with a larger annual mileage. Improved longevity is also a good point for electric vehicles. For example, in the case of primary energy consumption, the balance is in favor of diesel vehicle at 150,000 kms, but it reverses at 170,000 kms: 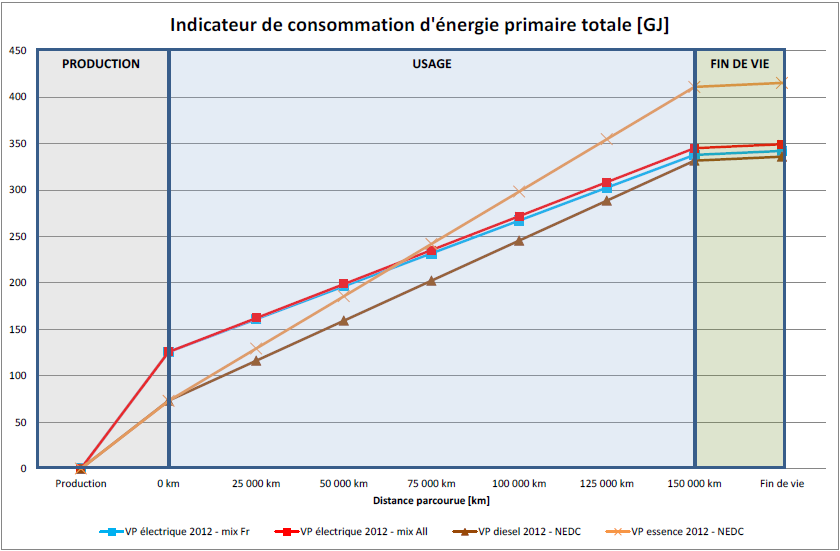 To go a step further, lifetime of vehicles should be a key element to improve the ecological balance, more than accountability, an outcome should be specified.

However cars become more and more a standard consumer product. This reduce artificially lifetime of those. This factor can also be improved : preventing quick obsolescence of vehicles, allowing the retrofitting of vehicles, etc. ..

Do we have to buy an electric car ?

If we limit ourselves to the results of this study, it appears that in general the answer is negative in Germany.
It is different in France, it is in favor of electric vehicles thanks to nuclear electricity. Whether we agree or not with nuclear energy, nuclear power plants are now present and the worst thing we could do from an ecological point of view would be to prevent us to use them.

Nevertheless, some aspects can put some advantages about electric vehicle:

Why I still would like to have an electric car

In my case, the situation is this one :

The first two points are not sufficient to give the score to electric vehicule . I still think this is good solution for different reason :

Super tanker are larger and larger, oil extraction methods are more and more complex,  but less and less earth friendly. Green fuels is also tested , but results are still mitigatd .

I expect more from electrical industry : many innovations are already being studied, target being to improve the efficiency of this energy ( smart grid , energy carruying with personal cars, new generation of batteries …). Moreover, the integration of renewable energy sources in the electricity sector is under control today.

Don’t forget also this other kind of electric vehicles

Electric vehicles are not only cars. This is the contrary: electric bicycles have become common, electric scooter have also done the buzz on stand of car / moto manufacturers this year. Those type of vehicles could be the future of transportation.

Car manufacturers are requesting us today to monthly fee specifically for battery maintenance, altough they should last the entire vehicle lifetime. In reality, mean lifetime of batteries seesm to be something like  150 000 kms / 1,2 = 125 000 kms.