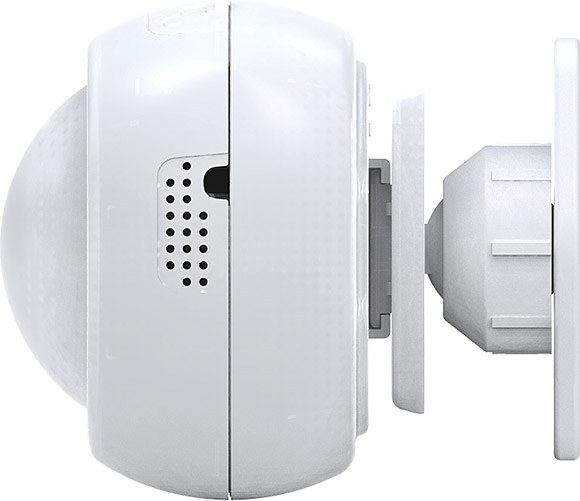 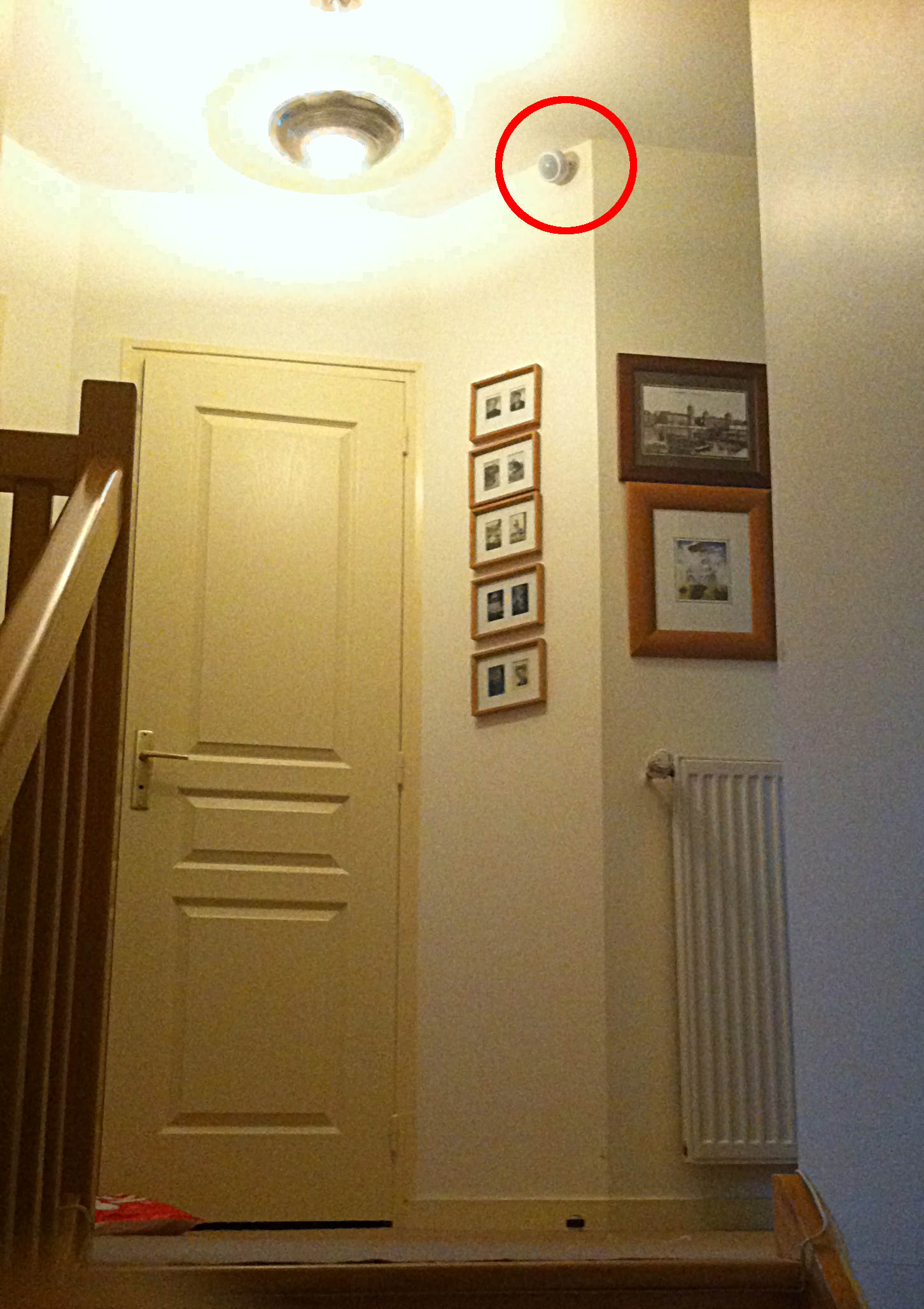 I’m testing two devices in my house. One is working for 5 month ( stairs ), the other for 2 months ( garage ).
The device is small and is shape is nice, like a ball. Quality is correct : nothing special to blame but nothing wonderful also.
The USB cable included can be used to update firmware ( not tested ), but also supply the unit. In this later case this is sufficiently small, but unfortunately black then really visible.

Mounting on a wall is not a problem. The detector can also be mounted on the ceilling. Two screws are fixing the detector directly on the wall, or a kneecap that permits to turn the detecteur. This last one is quite good, when screwed position is not moving anymore. However rotation is limited ( 30-40° ) and may not be sufficient to turn the detector in all cases.

An internal button is available and is used for different function. A internal led emits a bright halo through the plastic case, indicating movement detection normally, but it has also other features. An internal potentiometer is there to tune sensibility of motion detection

Pairing difficulty is the same order of complexity that other zwave devices working with batteries : not so easy. Problem is that with only one button and one led, you are not sure what you are doing. The manual is sufficiently expressive and manipulation simple, so after sometimes it is working.

Like other Zwave devices, the detector have several parameters that can be tuned through your automation system. It is mandatory to fine tune parameters to obtain good way of working. This is not the detector wouldn’t work if not tuning, but battery life could be reduced to several weeks, and all informations shouldn’t be send regularly ( temperature, …)

Here are the paramaters to for a correct way of working ( snapshot of veralite interface ) : 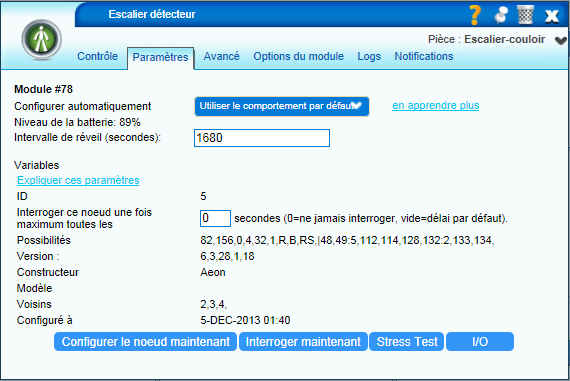 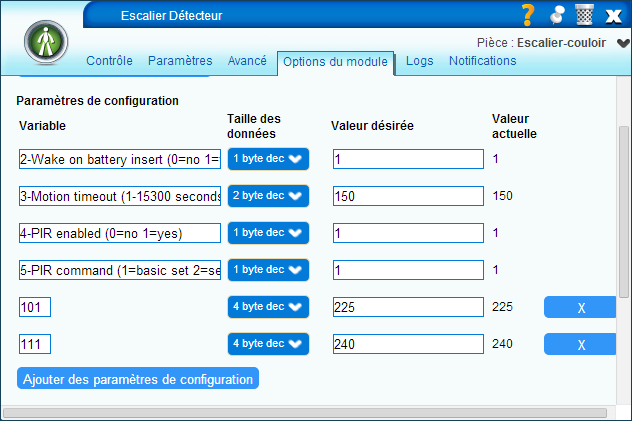 This peripheral is working perfectly with eedomus controller. It is described as 4 different sensors :

Registers configuration proposed above can be reused also for eedomus. Those parameters can be transmitted to the Aeon sensor through the “Radio parameters” tab, by using several CONFIGURATION_SET commands.

You can see that eedomus is managing correctly this device : registers are named and data size is by default correctly set for each one.

If not, the battery life is reduced a lot (around 1 month). I’ve not seen any drawback activating it. Sensor values are still sent regularly.

Regarding programming side, eedomus ease this part thanks to a pre-configured function, really simple to use, managing light switching when using a movement detector. 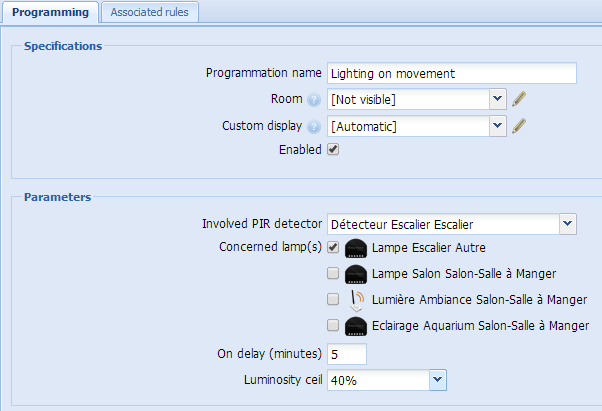 Room luminosity is also used to switch on (or not) the light, this feature being not supported by AEON sensor itself.

Unfortunately using this feature means that light switch order is going through the controller which increases latency by around 1 second. This delay is not acceptable in my case : climbing the stairs only takes several seconds, and light activation have to be very quick. Then I do not use this eedomus feature but associates directly the movement detector to the light module. I then lose, partially, the condition regarding room luminosity.

By associating directly the detector to an actuator module ( Fibaro FGS221 in my case), it is possible to have light controlled directly without any action from control box. There are several advantages to do so :

Those advantages are not at the expense of other drawbacks : veralite is still receiving detector state and can also control the light, it can also enable or not the light control from the detector by arming or not the detector.

Association can be done by hardware (button push on both devices) or using controller interface : 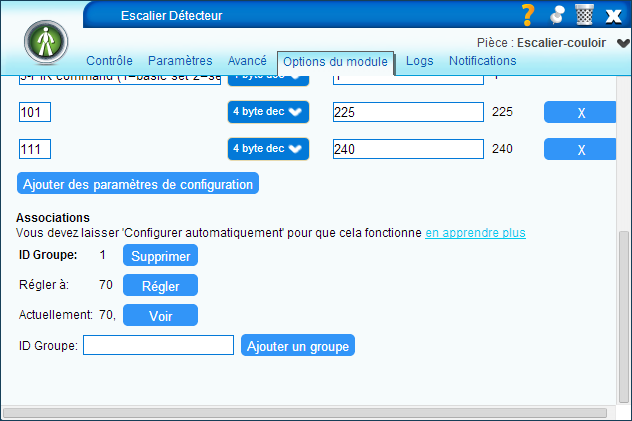 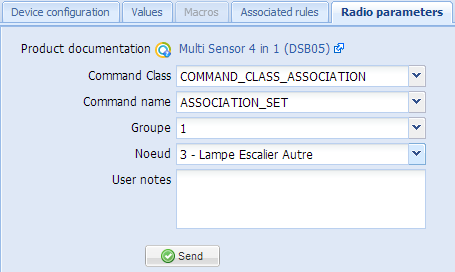 Only a single group, ID group 1, is active for Aeon 4 in 1. “Modify” buttons is used to select modules  (you can have several) that will be controlled by the detector.

Although I was thinking  to do all control through controller box functions, I discovered that Zwave direct association is simple and effective.  This way of working improve overall control quality which become more stable and effective.

Warning,  PIR Command parameter has to be set to 1 for the detector to be able to control associated actuator modules.

When using batteries for power supplies, I had to replace them after 4 mois and a half. Because of Timeout value which is set to  1 second,  there are lots of motion detection messages, for instance between 8h06 and 8h24 :

Regarding motion detection I obtained two kinds of behaviours :

When speaking about functionalities, there is a lack of function to precondition motion alert to luminosity level. It remains quite difficult to use controller to do such function.  For instance with veralite ( what about other controllers ? ), it seems not to retrieve luminosity value which is sent with motion detection paquet. It means that luminosity level recorded can be in worst case 4 minutes old. Unfortunately, with cloudy weather the luminosity is changing much more quicker.

+ In overall good motion detector. Correct sensibility
+  The 3 integrated sensors is a good point, in particular luminosity
+ power supply possible using USB cable ( not tested yet )
– some reliability issue may appear on some devices
– parameters have to be changed to obtain the best of the device